Over one hundred years ago, a group of Mount Gambier citizens made a decision to establish a dispensary to provide medicine to their members in the face of a situation they considered to be completely unacceptable for ordinary folk in the community. 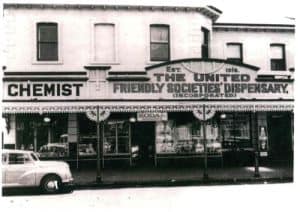 It was 1916 and Australia was heavily involved in the Great War. Thousands of Australians had been involved in the glorious failure of Gallipoli and many more thousands were to die on the battlefields of France and Belgium. One effect of the involvement of the nation in war and the shortage of goods in general was a significant increase in price for many common pharmaceutical items. When it became known that local chemists were intent on raising prices by as much as 160 percent, the Friendly Societies of Mount Gambier decided to act in the best interests of their members.

So who were these friendly societies?

Their origins date back to medieval times, to the days of constructing the huge stone cathedrals of Europe such as Chartre, Notre Dame and Winchester. Craft guilds were established to ensure apprentices were trained in the skills of stone masonry, carpentry and much more. These organisations had a charter to support and enhance the lives of members in good times and bad. A visit to some of the ancient towns in Europe will reveal the ancient guild halls of the weavers and leather workers preserved to this day. 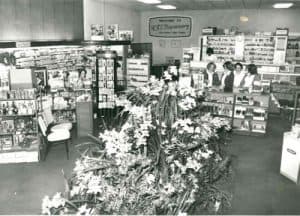 The Industrial Revolution in Britain saw the revival of groups with similar philosophies of providing mutual aid and assistance to members. Groups were founded among regional inhabitants, craft workers and religious adherents were promoted with the most interesting names such as the Independent Order of Oddfellows, the Rechabites  and the Hibernians. These were the Lodges, with their British origins, which on entry into NSW in the 1840s spread across the colonies with that same aim of providing mutual benefit to all members. These mutual associations were to provide assistance in the event of sickness and paid funeral and insurance expenses in return for membership contributions.

In 1916 a number of mutual organisations in the community made a decision that has resulted in the presence of UFS Chemist Mount Gambier 100 years on. The Ancient Order of Foresters, the Rechabites, Druids, Hibernians, Australasian Catholic Benefit Society, Australian Natives Association and the Sons of Temperance held a public meeting and announced the plan to establish a dispensary. This was not without precedent with the very first Friendly Society pharmacy established in NSW in 1896.

Decades of service by citizens who were members of those original foundation lodges and their successors has seen UFS Chemist Mount Gambier develop into a modern community pharmacy, still adhering to the core principle of mutuality. 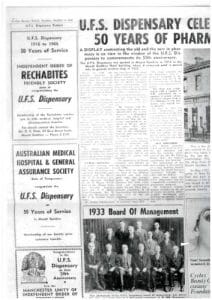 As described 200 years ago in the British Parliament’s Rose Act of 1793, that principle is to “create a society of good fellowship for the purpose of raising from time to time, by voluntary contribution, a stock or fund for the mutual relief and maintenance of all and every member thereof, in old age, sickness and infirmity, or for the relief of widows and children of deceased members”.

Times have certainly changed but the basic principle of serving our members and the community of the South East remain as firm as they did when espoused by our founders over 100 years ago.